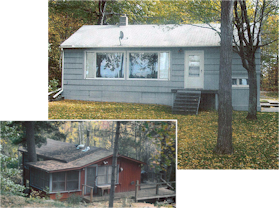 Dug-up, researched, compiled, typed, and collated for the Kabetogama Historical Society by Dan Kuehn, who completed this project August 15, 2007. Special thanks to John Stegmeir of the Department of Natural Resources in Orr, MN, and to Alan Baumgartner, North Star Electrical Co-op, Littlefork, MN, for the use of their files.The first survey of State Point was made in 1933 and the first "lease" was granted in May 1935, so it can be assumed that State Point Road was constructed in 1933 or 1934.

State Point Subdivision was created on lands donated to the State of Minnesota by the Federal Government; the land was designated "Trust Fund Lands" held for the benefit of the public. In the case of State Point, the lands were designated "School Trust Lands" and any proceeds from the land were to be deposited into a trust fund account and the interest from this fund is used to support and aid the public schools throughout the State.

The area was divided into 22 parcels, including "the island," each to be used for a "private summer home." The first leases were not actually leases but were in the form of special use permits issued by the Department of Conservation, Division of Forestry. They were issued after those wishing them filed an application to the Commissioner of Forestry and Fire Prevention.

Each application specified a particular lot and gave a description of the proposed building to be built by the applicant. The applicant agreed to begin construction of the building within six months of the permit date with completion within a year. The application was to be "attached to and made a part of the special use permit when granted."

Unfortunately, three properties do not have this application in their files.

The first special use permit on State Point was issued in May 1935, followed by three others in that year, and others in the years that followed. It is not possible to determine which cabins were built first, but with the permit requirement for construction within a year, it can be assumed that the cabins were built close to the order in which the permits were granted.

At the time, the special use permits cost $10.00 per year. They were granted for one year but could be renewed each year if the permittee met the permit terms and paid another $10.00 "rent."

According to North Star Electric Co-op records, electricity came to State Point on July 14, 1948, when Site 2 was connected. Most of the other sites were electrified in 1954, but power did not come to Site 10 until 1964.

Leasing began in November 1957. The term of each lease was ten years with renewal if each year's rent was paid. The rent at that point was $25.00 per year.

Significant change came in September of 1975. Rent was increased to 5% of the value of the land as assessed by the Department of Natural Resources. The values were assessed and the rent increased accordingly every 10 years until 1990, at which time the department declared that reevaluation would occur every five years.

Also, in the early 1970s, the Federal Government and the State of Minnesota were planning a national park in the area. Part of the initial plan included the acquisition of State Point which was to be used for public access to the new park. Opposition to this plan was, of course, very strong.

Elmer A. Mueller, the first permittee, was at that time the head of Adult Education for the State of Minnesota and had many political connections. He and others led the charge to keep Slate Point out of Voyageurs National Park and they were successful. The park boundary was redrawn excluding State Point.

Leasing almost came to an end in the early 1990s when the state legislature passed a law allowing the sale of leased properties. Because State Point was designated school trust lands and in accordance with the state constitution, these properties had to be sold at public auction in order to secure the highest value possible.

Some five lessees on State Point, concerned about losing their lands, pulled their properties from the sale and continued to lease. All others were sold at auction to their lessees at values assigned by the state through independent appraisals. No one bid against them.

In 2000 the state legislature passed another law requiring the state to exchange leased lands with the county. Thus the other lessees could purchase their land from the county without going through public auction. All remaining did that, and no more leases are believed to exist.

This information was gleaned from DNR lease files and other sources as indicated. St Louis County could not assist in this research project because its records do not go back far enough. For example: After cabins were built the county could not tax state land so they assessed the owners a personal property tax on improvements. County tax records only go back to 1980. County "planning and zoning" did not come to the area until the early 1960s; but in fact, Planning and Zoning records and building permits go back only to 1974. The Assessor's records show that the cabins on State Point belong to "Era 5" which means they were built in the 1940s or before.