The Hand-Carved Treasures of Herman Melheim

Herman and Lillian Melheim surrounded themselves in their log home in Ray, and in their cabin on Moose Horn Road, with Herman's beautifully hand-carved furniture.

According to an article from the St. Louis County Historical Society, the Melheims came to Kabetogama because of the abundant moss in the area - that he needed to feed his reindeer herd. You can read more about that in the actual brochure (click here for the PDF).

Herman built their home in Ray in 1935 using native white pine and continued to live there at least until 1978 when the article was written. After building the three bedroom, they needed some furnishings and there was still ample white pine available on the property... so he started carving. At first, he just used a pocket knife, and eventually developed some custom tools of his own. He worked primarily in white pine, but also used mahogany, walnut, basswood and myrtle. 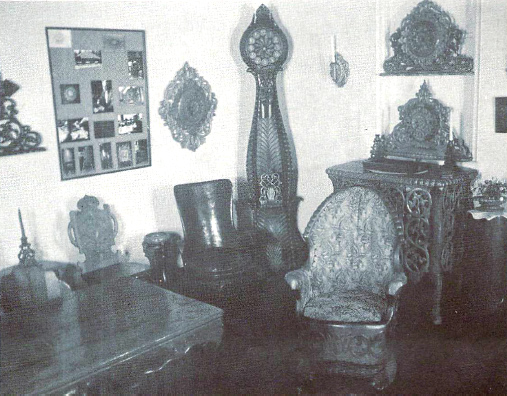 He generously donated the bulk of his handcrafted furnishings to the St. Louis County Historical Society in 1976. A real "treasure" in the collection is an elegant, eight-foot tall grandfather clock carved from a single white pine log. The clock was once featured in Ripley's "Believe It or Not" newspaper series.

Tables and cabinets, rockers made from single logs and more... through the years both friends adn tourists found their way to the Melheims' cabin to purchase his beautifully carved works.
When the Kabetogama United Methodist Church was built in 1964, Melheim spent six months carving carving furniture and items like the pulpit, baptismal font, candelabra, guest book and other items for the church. He also created an altarpiece in 1977.

At the time the article was written (most likely 1978), he was still living and carving at the cabin at Kabetogama.