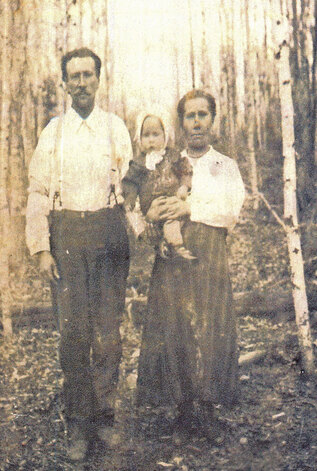 Gust, Arvid and Tyyne Lehto
Gust Lehto was born at October  20, 1876 and wife Tyyne was born on December 22, 1882. Both migrated to the United States from Finland. Gust arrived in the United States on January 18, 1905 on the vessel New York, after boarding at Southampton, England, leaving behind his young wife Tyyne and very young one month old son, Arthur.

Tyyne followed her husband to the United States, arriving on May 3, 1916 on the passenger ship 'United States.' Second son Arvid was born December 22, 1917. On December 20, 1919 Gust received his U.S. citizenship, witnessed by John Seppi and Matt Wurri, both farmers at Kabetogama. Gust and Tyyne's first born son Arthur arrived in the U.S. on February 3, 1921 on the ship 'Drottningholm', which had departed from Sweden. Gust secured his homestead - located at 9951 Gamma Road - on September 20, 1921 with papers signed by President Warren G. Harding.

In later years the United Methodist Church held its first church services in Gust and Tyyne’s abandoned home until church members built the church at the present location.

On October 27, 1925, at the age of 48, Gust was killed in an automobile accident north of Orr, Minnesota. This tragedy left Tyyne to raise their 6 children. Gust is buried in Virginia, Minnesota. Arthur was by this time a young adult, and was able to provide much help to his mother on their farm, taking care of cows, chickens and siblings. Even Arvid, who was by this time 8 years old, had his farm chores to do.
School for the children was located across from the Kabetogama Community Center. All classes were held in the one room school. One of Arvid's jobs was to get to the school earlier than the other children and get the wood stove going to warm up the school. Arvid and his brothers and sisters spoke only the Finnish language. After the 1st day of school Arvid decided he could teach sister Velma how to speak English: as if he could speak it himself. So even at that age Arvid was a jokester. 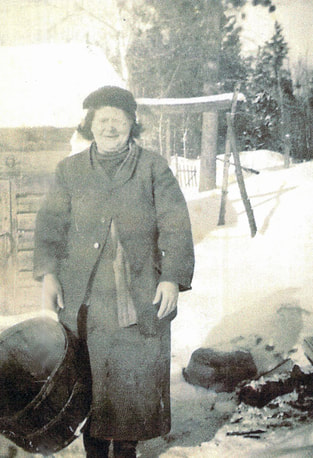 Tynne Lehto
In the summer Tyyne washed the family clothing outside, using one big round metal tub with a scrub board to scrub the clothes clean. Water was heated on the wood fire onto which the metal tub sat. Another tub sat alongside with clean rinse water. Naturally all clothes were hung on clotheslines outside. All clothes were wrung out by hand. In later years she was thrilled to get a washing machine with a motor on it and even a wringer. No more scrub boards for her.

Tyyne and Gust had a small two room log sauna. One room was used for disrobing/dressing, and the second room was for bathing. A large metal barrel, laying on it’s side mounted on metal legs and fed wood thru the homemade door on one end, provided the heat. On top of this barrel were rocks that were heated by the barrel stove and steam was supplied to the room by wooden dippers filled with water and thrown onto these hot rocks. Kids always took saunas together, until they reached a certain age, whereas at that time women and girls together, men and boys together. When Arvid and Tauno got older they were allowed to take their sauna with the men or by themselves; as they didn’t want their sisters to see then in the nude!! Tyyne had the sauna going every Wednesday and Saturday nights. People who did not have a sauna would pay her 25 cents for a bath. She always supplied them with her homemade soap and a large bath towel. One time someone gave her a box of chocolates as payment, which she hid in her dresser amongst her good clothes. Arvid and Velma, being curious little ones, found the once delicious chocolates and proceeded to eat them, only to discover they tasted like the mothballs Tyyne used in her dresser.

Many times Chief Woodenfrog and his family stopped to visit Tynne. Seems like they always knew when Tyyne had one of her delicious meals on the table. Whatever Tyyne served they would eat by first mixing all the food together before eating it. 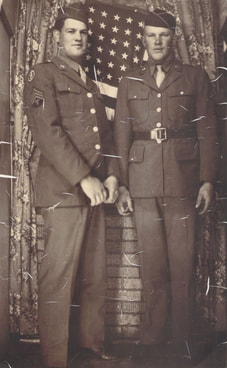 Arvid Lehto, at right
Arvid served his country during WWII entering at Fort Snelling, Minnesota on March 2, 1942 and was honorable discharged on January 16, 1946 at Camp McCoy, Wisconsin. Among the many battles he fought were Ardennes, Rhineland, and Central Europe. According to Arvid all soldiers were very upset when President Roosevelt allowed the Russians into Berlin, when so many soldiers died fighting to get there. Arvid was wounded twice and had many nightmares of his experiences during the war. Upon his discharge he got a job in Waukegan, Illinois for the Johns Manville Co. making pipes covered with asbestos. A short time later he returned to Kabetogama and found work building resorts and remodeling cabins. In 1948 he met his beloved Becky Lehman, from Littlefork, Minnesota who was working Arrowhead Lodge. At that time Arrowhead was owned by Ed and Helen Weber. Helen had a big office off the kitchen. As a big beautiful woman, Helen wore glamorous silk dresses, diamonds, rings, and bracelets. Her hair and make-up were immaculately done. Helen was a very business oriented woman and all her help knew when she spoke her word was the rule. She had a crew of one head cook, two kitchen aides, two waitresses, two bar girls, two cabin and laundry cleaners and four to five dock boys. All these helpers were teenagers, except for the cook and bar girls. Becky worked in the kitchen and also was in charge of cleaning the Weber’s residence. Buses brought business men each week, arriving mostly from the Chicago area. Rumors among the help at Arrowhead were that these business men were Mafia. George and Martha Long would take them out fishing and sightseeing on their large launch. The Longs lived across the bay from Arrowhead. All the help received good tips from these business men but the two bar girls always bragged about how much more they made.

Arvid Lehto married Becky Lehman in 1949 after courting her while she worked at Arrowhead Lodge. Arvid had a job working at Totem Pole Resort building new cabins and remodeling the existing lodge and cabins. While living at Totem Pole Resort Arvid spent winters putting up ice for the resort. Using an ice cutting saw with a motor on it he would cut huge blocks of ice, put them on a conveyor belt that took them out of the water and into his truck bed. The ice was then hauled to a log shed where the ice would be covered with sawdust where it lasted the resort most of the summer. He also sold ice to the other resorts.

Totem Pole Resort was owned by Carl and Goldie Moore from Waseca, Minnesota. They had bought the resort from a couple by the name of Youngstrom. Carl and Goldie had a restaurant in Waseca which Goldie and her son, Jack, operated. Carl and Goldie’s mother, who was an excellent cook, ran the resort and while Arvid worked maintenance, Becky helped in the kitchen and cleaned cabins. Carl Moore commissioned Herman Melheim to carve the two large totem poles at Totem Pole Resort. One was placed to greet guests as they arrived at the resort and the other, which was carved with a huge fish in its mouth, was erected at the breakwater to welcome guests as they arrived by boat.
Arvid and Becky lived in a small house at Totem Pole Resort. Son Rocky was born while they lived here. When Rocky’s time for delivery arrived unexpectedly fast, Becky and Arvid made it as far as Bob and Ann’s Bar and Groceries. (Now Lure Me Inn). So he was actually born in the car, not the hospital. Upon arriving at the hospital in International Falls, a shaken Arvid and Becky were relieved to learn they had a healthy son. Another birth arrived the same day. The famous rideable giant walleye was erected at the Junction of Hwy 53 and County Rd. 122.

After the sale of Totem Pole Resort to Don and Mary Spaulding, Arvid started his own business of hauling gravel and cutting pulpwood, all the while staying in his life long love of building and remodeling cabins, and resorts, building breakwaters and docks.

Tyyne passed away at Kabetogama in July 1961 and is buried in International Falls, Minnesota. 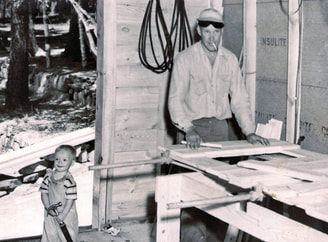 Rocky started early learning from dad Arvid
Growing up with Arvid and Becky were wonderful years for Rocky. He and his Dad were very close. As a teenager Rocky and Arvid worked side by side, Arvid taught his son the trade of building docks, cabins, rock work, and being “jack of all trades”.

Both, along with Becky, worked for Jeno Paulucci, who had a guest lodge on the north side of Lake Kabetogama. By this time Arvid and Becky had purchased their own property from sister, Velma and her husband Eli Manninen. At Jeno’s, Arvid remodeled the lodge and caretaker’s house, built a boat house with guest rooms upstairs, built the sauna with the rocks arriving from Finland and placed them on top of the stove. He also built the docks and breakwater and bocce ball court. Arvid and Rocky made many trips hauling passengers and supplies from the Ranger Station boat docks to Jeno’s. Using Jeno’s large barge they hauled sod for the lawn and even white sand from Florida dumping it onto the beach at Jeno’s, only to find in the spring the winter ice had washed all the sand away. Jeno also had a plane he used to fly in supplies and passengers, food brokers, advertisers, and entertainers from Duluth.

Arvid passed away in 1971 of cancer. He is buried in the Veterans Cemetery in International Falls, Minnesota.