They Came, They Fished, They Caught

As told by Tracy Heidenreich at HotSpotOutdoors.com
Photos by Steve Foss 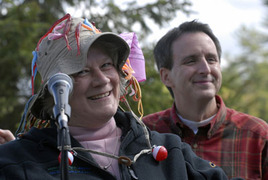 As openers go in Minnesota, the 62nd Annual Governor’s Opener, held on Lake Kabetogama for 2010, was as beautiful as they come. And the fishing wasn’t too shabby either. Light winds and clear skies with a predicted climb to 70 degrees from the chilly overnight lows in the upper 20s were on order.

The early morning greeted Governor Tim Pawlenty, his wife, Mary, and Lt. Governor Carol Molnau, along with her family, to a frosty start on Saturday’s celebration of Minnesota’s most significant traditional outdoor activity. The chill from the first boat ride of the season was burned off quickly, though, when the governor’s guide, Tim Watson, got the First Couple hooked up on walleyes by 7:50 am. They weren’t the biggest that Kab had to offer for the day, but they were on the board, and the boat would not be skunked. Both fish were released after the Pawlentys posed for photographers. 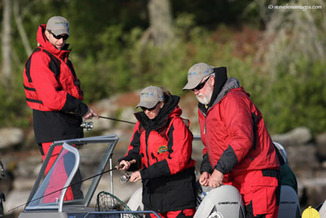 The Pawlentys worked their minnows in roughly 18-20 feet of water for their first walleyes of the season. Mary was noticeably anxious to catch a fish. Often she had both hands on the rod trying to sense any bite she might get, hardly diverting her attention for anything but another minnow from her guide after she missed her first bite. The Governor would not be out-fished by effort either. He played out line a couple of times hoping the bite he felt would result in a hookup after reeling up the slack and trying a hookset. They were there to fish!

Lt. Governor Molnau was also not to be outdone. She actually scored the first walleye of the day a few minutes before either of the Pawlentys, which gave her bragging rights for for yet another Opener. Molnau was fishing with guide Frank House just a stone’s throw away from the First Couple. Both House and Watson have solid reputations for fishing on Kabetogama, and they were proving to be great choices as guides for our state officials.

The Ash River/Lake Kabetogama communities offered their hospitality for the 2010 Governor’s Opener, and they demonstrated their pride in what the area has to offer for Minnesota tourism. Located approximately 20 miles southeast of International Falls, Lake Kabetogama lies entirely within Voyageurs National Park. It’s one of five lakes that make up the Namakan Reservoir, which is a natural drainage system stretching from northeastern Minnesota to Hudson Bay. 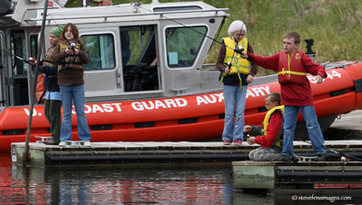 Kab, as it’s affectionately known, is fairly shallow on average compared with other Canadian Shield lakes. Of its 25,874 acres, roughly one third is 15 feet deep or shallower, with a maximum depth of 80 feet and an average depth of 25.2 feet. There is a good variety of structure and bottom content available to stimulate a solid ecosystem and give anglers plenty of option.

The Ash River should not be overlooked either, especially early in the season,though low water levels should be noted. Currently, water levels of the Namakan Reservoir are about 3 feet low and that can make boating a little tricky. We drug the lower unit over an unexpected rock while trolling, but most obstacles and channels are clearly marked. With that, as you come into the Ash River from Kab, there are several good places to fish. Reports (and experience) from the resort docks along the river were consistent: The fish were in and you didn’t need a boat to get to them. Many resort guests were catching walleyes, northern, and crappie right off the docks with slip bobber rigs. Some say leeches were best but most folks were using minnows. You really didn’t need much more than 4 to 5 feet of water to find fish. A slight current break or a bit of a depression and you were in. 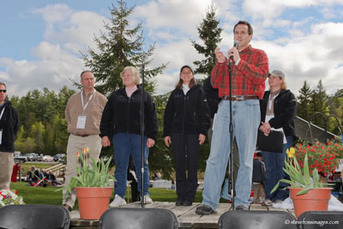 Particularly when an event of this size is handled by smaller, more remote communities, everyone plays a part in the event’s success. Hosts were spread out between Ash River and Kabetogama which I enjoyed since it was my first time to the area, and I enjoyed seeing more of it than I may have otherwise. Steve Foss and I lodged at Sunset Resort on the Ash River, which has some of the most comfortable beds I’ve ever slept in – and I have a Sleep Number bed at home. We were guided by Kyle Glennie out of the nearby Ash-Ka-Nam Resort, which is where Lt. Governor Molnau stayed.

Our fishing for the day didn’t get started until a bit later. Kyle took us to some very good looking spots and we began copying what we saw the Governor do on their first spot. Why mess with what works?

We did get a few walleyes in 18 feet of water before the casters in Kyle and I just had to go work over a shallow bay. We threw around a while and raised several pike out of 3 – 10 feet of water on spinner baits and Rapalas. The next bay yielded several Smallmouth bass up to 3 ½ pounds on crank baits, also in 5 – 10 feet of water. 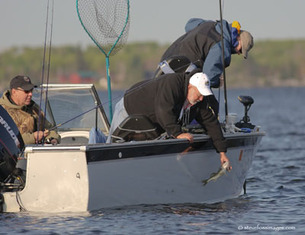 It wasn’t until the end of our day that we realized the better walleye bite seemed to be in 30 – 35 feet of water and the larger shiners were the preferred bait on a Lindy Rig versus the rainbows or fat heads. At least Steve was able to boat a 22 incher on the last surviving shiner we had in the bait bucket. And that fish slammed it. It made us wonder if using smaller minnows we were underfishing some hungry fish. One more day could have answered that.

In the end, if we would have been in the annual challenge the Governor and Lt. Governor throw down each year for first, biggest, and most walleyes, we would have been beat out in all three categories. Though it should be noted we spent more than two hours photographing the governor and his entourage Saturday morning before we could wet our lines. Former women’s arm wrestling champion Carol Molnau muscled out everyone else in the Capitol Competition for the first and most walleyes, with 5 total, anchored by a nice 19 incher. Pawlenty may have been the last one to boat a fish of their group, but he took top honors for the biggest walleye, at 22 ½ inches. The always edgy Molnau quipped that it was a rarity for Tim to win even one category. 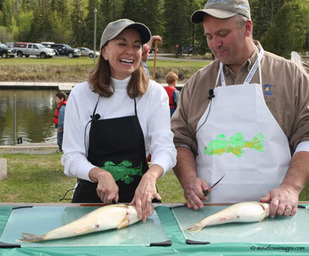 Other anglers with notable catches were a 37-inch Northern Pike caught by Josh Kane, who was guided by John Reamer. He used a Lindy Rig and minnow in 10 feet of water. The largest walleye reported was caught by National Guardsman Tom Caldwell. He was guided by Chuck Gassmanh from Iowa, Iowegians have strange length rules. Chuck recorded the fish at 26 and 50/100 inches. We told him that was equal to 26 ½ in Minnesota.

The Ash River/Kabetogama Governor’s Opener was the eighth and final for Governor Pawlenty and his cabinet. Unfortunately, while fun was on the menu, duty called Pawlenty away after shore lunch back to St. Paul, so Mary Pawlenty had to fish without him in the afternoon, when she did catch a Northern Pike. She expressed her thanks and vowed they would continue fishing Minnesota openers for years to come. 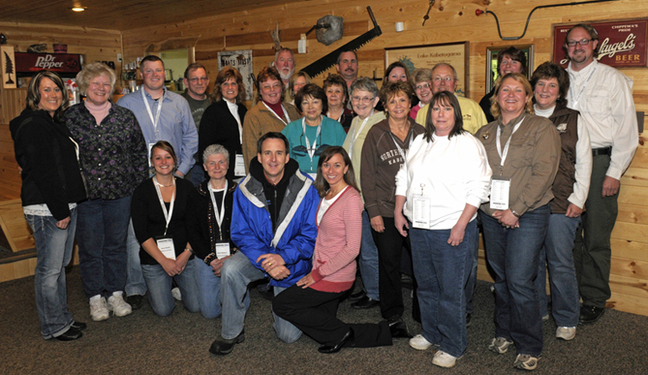 Next stop: 2011 Governor’s Opener in Grand Rapids. Who will we be watching, and more importantly, can they fish?

Thank you to Tracy Heidenreich, Steve Foss and HotSpotOutdoors.com for their permission to present this story and images. Click here and here for more images online.